In commemoration of the 60th Anniversary of the Universal Declaration of Human Rights (UDHR), we declare our collective commitment to strengthening the human rights movement to achieve social and economic justice.
Inspired by the universal recognition that all human beings are equally entitled to human rights under all circumstances, we join the growing call by communities around the world to defend our collective human rights.
Reaffirming the will of the people as the basis of government authority, we demand more participation of the least powerful among us in the decisions that affect their wellbeing and future.
Recognizing that all human rights are equally essential and that all human beings are equal before the law, we reject and demand redress for governmental and private practices that negatively affect our communities.
Understanding that human rights are protected by the rule of law, we call on elected officials to implement international human rights treaties and universally accepted human rights standards that guarantee the claim on human rights by everyone in New York City regardless of race, ethnicity, sex, sexuality, gender (including gender identity & gender expression), language, immigration status, age, economic condition, disability, religion, family composition, marital status, etc.
Recognizing that human rights connect the struggles of all people, and working to eliminate intolerance that keeps sisters and brothers alienated from the struggles of others, we stand united in defense of the human rights of all New Yorkers to live in dignity, equality and justice.

Posted by NYCHRI Coordinator at 1:53 PM

The NYC Human Sexuality Conference August 15-16, 2009 will discuss this issue. Plan to participate. http://www.conference00.com
See you there! 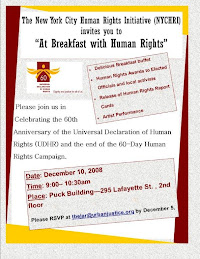